suggestions of great comics for your kids to read

​The past few years have happily welcomed me back into the fold of my friends in Riverdale. Not all of the Archie Comics line-up is intended for young kids, but the New Riverdale line (currently including Archie, Jughead, Betty and Veronica, Reggie and Me, and Josie and the Pussycats) aims to please tweens and teens new to the characters. The comics are also eminently enjoyable for adults like myself nostalgiac for the eternally youthful teens and their folly-laden exploits.
Published early in July 2017, the one-shot issue of The Archies chronicles the origin of the garage band gathered together by the one-and-only Archie Andrews. Adults my age may have the sudden earworm attack of the catchy “Sugar, Sugar” when they recall that the idea of a music group with Archie, Jughead, Betty, Veronica, and Reggie has been around for a long time now. Joe Eisma’s characer work makes it clear that the gang has seen updates for this Millenium. Having worked for years on the adult, mystery-thriller series Morning Glories, set in an engimatic prep school, Eisma exercises great skill in making every teenage character he draws both expressive and unique, which benefits readers who encounter these teens for the first time, and also fans who (needlessly) fear their favorites may have changed too much.
Don’t worry. These are still the Riverdale kids everyone loves to love (except maybe that egotistical Reggie)! The major change is that the book may follow a continued storyline instead of short punchline-based vignettes. Importantly, what stays the same is that The Archies holds lessons about teamwork and perseverance through cooperating and compromising with bandmates. Any 12-year-old who has done a group project in school, any 13-year-old who has played an instrument in band class, any 14-year-old who knows she can make something bigger than herself with a little help from her friends… will see herself in the teens in this book.
You may still be able to find a copy in your local comic shop. Do so now, so you and your kids are primed for the fun in the ongoing series beginning October 2017. Another selling point is that the writers hope to include cameos with famous bands similar to their book Archie Meets the Ramones. After Archie Comics teased this added feature on Twitter, Joe Eisma “liked” my suggestion to include Elvis Costello and the Attractions someday. So you might use the ongoing comic to introduce your kids to your favorite bands. Because it’s one thing to hear music recommendations from your dad, and another to get them from Archie Andrews. 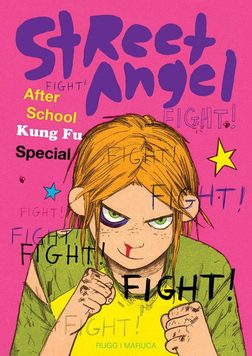 ​Street Angel series of graphic novels  (Street Angel: After School Kung Fu Special, The Street Angel Gang, Street Angel: Superhero for a Day)
Published by: Image Comics
By: Jim Rugg and Brian Maruca
Price: $19.99
Reader Level (suggested): Middle School and High School
Why you should buy it: Reinforces importance of self-confidence, appeals to reluctant or non-traditional readers.
Haven’t you been looking for a graphic novel series that captures the grit of 1970’s action movies like The Warriors and Death Race 2000… for kids? You haven’t?! Well, shame on you. It’s time to pick up the Street Angel books!
Jesse Sanchez is the Greatest Ninja of All Time, unsung protector of all underdogs in her city, crushing wave after wave of supervillains, ninjas, pirates, cultists, and criminals. She is also a homeless middle school student who lives on the street with only her skateboard and the clothes on her back. Follow her adventures in volumes that can either stand alone or reveal an ever-widening pantheon of characters and world-building.
You can pick up the original 2004 mini-comics  in one volume by Adhouse Books. The more recent publishing format, from Image Comics, uses slightly oversized hardback editions with dazzling color and brilliant graphic design. In all the books, an undercurrent of true respect for the design and story structure of classic comics, action movies, and trading cards pervades.
Wacky, over-the-top, stylized violence also pervades whenever Street Angel protects her friends and the street she inhabits. Characters sometimes curse with euphemisms that reflect the harshness of grown-up action fiction. But, for discerning readers, the rough edges serve wild enjoyment of compelling storytelling. In fact, many reluctant readers who have come to feel like adult-mentored suggestions for reading material only clumsily mask boring didactic messages will respond to the seemingly reckless joy of reading these books.
I met Jim Rugg at Austin Books and Comics, and shared a foolish incredulity at his process for writing YA fiction. Assuring him that I loved the collection of Street Angel comics, I asked him if editors had stamped the YA label on a rollicking story for any age group. The characters seem completely unlike standard YA archetypes we see in both successful and redundant series written for teens. Mr. Rugg confirmed that he always attempts to write compelling, character-based stories foremost… but that he also has clearly in mind a YA audience when writing this series. He wants readers to find these characters both exciting and relatable, and feel the need to discuss the stories with peers. Each of the Image volumes features in the back a list of “discussion questions” that gently parodies those in more mainstream YA, but could indeed be used for both funny and thought-provoking conversation.
Though these stories convey some silliness and action movie hyperbole, readers will feel real empathy for Jesse/ Street Angel as a homeless child who struggles as much for a pair of shoes and food in her stomach as she does against gangs of super-powered miscreants. The three graphic novels emphasize the values of finding self-worth in your abilities and accomplishments instead of possessions, keeping friends you can trust, and not becoming mislead by the appearances of others.
Want to try out a sample story before committing to a graphic novel series? Head to your local comic shop this May 5, 2018 for a special Free Comic Book Day chapter. For the impossible-to-beat price of FREE, pick up a single-issue story called Street Angel’s Dog.

Watch for more graphic novel and comics suggestions in this space.